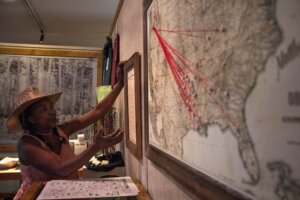 Image via oregonhumanities.org article, “Reaching Back for Truth”

One of the most rewarding parts of recruiting and staffing is learning about the incredible contributions different organizations are making in our state and our community. As we celebrate Black History Month, we wanted to put a spotlight on Maxville Heritage Interpretive Center (MHIC) and the history of Oregon’s Black loggers. Located in Joseph, Oregon, MHIC’s mission is to collect, preserve, and interpret the history of the multicultural logging community of Maxville.

We chatted with Gwendolyn Trice, the founding executive director of the Maxville Heritage Interpretive Center, to learn more about the work she is doing to shed light on our state’s overlooked history and this once vibrant town.

When did you learn about Maxville and your connection to the town?

I first learned about Maxville and my connection to the town in 2003. I was living in Seattle working on degrees in video production and graphic design and would visit Eastern Oregon (where I was raised) on the weekends when I could get away. On one of the visits to Wallowa County, during a local celebration with the indigenous tribes, I found out my family was recruited just outside of Pine Bluff, Arkansas in 1923 to log and live in the area.

How did the Maxville Heritage Interpretive Center get started and what is its purpose?

I bought a home in Enterprise, Oregon around 2006 to be closer to the story and founded the organization in December of 2008. I got involved in rural initiative leadership and community-building programs to learn more about my community and for them to know about me. Our purpose is “To gather, preserve, and share the rich history of African American, Indigenous, and immigrant loggers in the Pacific Northwest. We utilize inclusive stories of multicultural logging communities to better connect the experiences of immigrants and migrants to a larger American narrative.”

What were the significant challenges you had initially? Where did you start?

My initial challenges were to get a better understanding of non-profit organizations and building a strategic way to prioritize steps to engage my local community, bring public awareness to this hidden history, and engage an initial group across multiple disciplines that included descendants, community leaders, and others interested and willing to form our organization. I really relied upon our local economic development district heavily for resources, training, and advice.

At a time when Oregon’s constitution included a provision of discriminatory Jim Crow laws excluding Black people and many people of color from the state, what was life like in Maxville during that time? 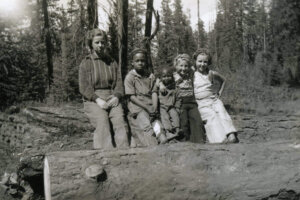 Maxville was a town built by a timber industry company with holdings in Missouri and Louisiana. They recruited both Black and White loggers out of the South and Midwest. The town was segregated by ethnic groups as well as by single and married status. Most of the residents came out of Jim Crow south, so they clearly understood the sundown town systems within Oregon and the Klu Klux Klan mindset. Part of the experience includes homesteaders who were already living in the region, some folks even coming from West Virginia, and some from the mining industry who came in covered wagons to escape the poverty and industry substandard for workers. Relationships between people living in remote spaces where the land and weather is severe learned to depend on and forge relationships not typical in towns and cities. Maxville had a Black baseball team as well as a White team who played against each other on-site, but teamed up when competing with other teams. They also had separate schools for Black and white children. There were about 400 souls living in Maxville, which included approximately 60 African Americans. Better pay and opportunity for change were key factors.

What caused Maxville to become a ghost town? Where did its residents go?

With the Great Depression in 1928 and banks continuing to close, Maxville officially closed in 1933 when the Bowman-Hicks lumber company pulled up stakes and moved out of Oregon. Black loggers stayed in the industry and some moved to the neighboring towns of Wallowa, La Grande, and Baker City — my own father bought a logging truck and began to haul logs as a contractor. Other towns were part of a railroad logging industry and McNary, Arizona, Weed, California were two towns these loggers traveled to for work. Once WWII engaged the US, a number of these men moved to Portland, Oregon in the shipyards and Grass Valley, California. Others lived their lives out in Eastern Oregon or joined the war effort, including my father and uncle. We are actively researching the descendants of Maxville.

How has MHIC grown over the years? How has the pandemic affected the center?

The Maxville townsite and museum collections of MHIC provide one of the few windows into a particular part of the American story: the migration of African Americans to the Pacific Northwest at a time when exclusionary laws and sundown codes were in place, the cultural practices of Black and multiracial loggers such as occupational folklore, storytelling, culinary insights, and music. Our collection illustrates, through interviews, photos, textiles, and artifacts, the many ethnic groups that contributed to our communities in the region.

MHIC is the only museum in Oregon that celebrates the inclusion of people of color in the rural landscape around railroad logging, in a state that had exclusion laws in place when African American families arrived in 1923. The history of multicultural logging communities like Maxville is not available through the present heritage organizations within our county, state, or region.

We are dedicated to a timber culture that values diversity, equity, and inclusion. We recognize the significance of history and story and support the stories of communities and individuals who have been marginalized in the past or are fighting marginalization. The story of Maxville is one part of a larger story of African American, Indigenous, and immigrant loggers in the Pacific Northwest.

We are purchasing the original townsite for a total of 240 acres for education, forestry study, and leadership training also archeology study, and creative cultural activities, including roots foods and music celebration.

The pandemic has caused closures for most of a year while we bring programming on-line. We partner with other organizations across the Pacific Northwest and nationally to bring critical voices and a curriculum that is inclusive. Our Interpretive Center is being improved to provide a safe and healthy environment for staff, volunteers, and visitors alike. We follow our state’s recommendations for the pandemic and have had tremendous support from Oregon foundations, community outreach, and regional programs. We’ve seen interest across our networks grow during this time and are grateful to see our non-profit bolstered to continue our good works.

What does the future look like for the organization? What keeps you moving forward?

MHIC will embark on a land acquisition project to secure the original Maxville townsite and surrounding forestry land. This new facility will allow us to highlight our material collections, our oral histories, and our place-based storytelling work in a newly impactful way for museum visitors. As an active archeological site, we can thoughtfully introduce important African American heritage to the network of archeology students across the country and help build the next generation of diverse forestry workers in Wallowa County and beyond.

We are establishing a unique model for a multicultural educational center that both documents and presents our important legacy collection on a historic site. The 240-acre land trust will serve as an educational destination for timber practices, outdoor school camps, archaeological study, and stewardship of the land and watershed. By developing a destination space for historically underrepresented minority communities to host outdoor school programs and archeology studies, we will teach all participants about timber culture that is inclusive while introducing archeology students across the country and help build the next generation of diverse forestry workers in Wallowa County and beyond.

Currently, we are at a point in our development where we have maximum support from our Board of Directors and from regional partners. MHIC has accomplished each strategic benchmark to move from a grant-funded model to a sustainable endowment, which will involve engaging new high-level donors to support our work. This support will allow us to preserve the story of Oregon’s multiracial logging industry and provide historical interpretation and exhibits for future generations of Oregonians in perpetuity.

What keeps us moving forward is our stories, our passion, there is more to know, learn, and celebrate.

For more information on how to work with Gwen, please visit the Maxville Heritage Interpretive Center’s website.

Submit a Question
Our Diversity Blog